This was my first visit to the Open Eye Gallery.  It is a smart, modern, relatively new gallery space, perhaps on the small side but certainly adequate for the shows we say on Saturday. 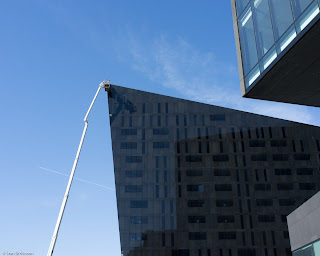 Liverpool One - above the Open Eye

There were two exhibitions:

The works on show comprised:

It was the latter that interested me most, but a word about 'Less Americains' first.  This was originally created as a book, based on Robert Frank’s 'Les Americains'; and I have to say that, for me, it works better in that form.  On the wall, the selection of 12 or so prints demonstrated the graphic qualities of Henner’s ‘reduced’ versions of the originals, but I’m not sure they achieved a lot more.  The concept of manipulating an iconic photobook in this way is a clever one and well-executed.  The witty title and the fact that Henner’s outcome (as a book) is, genuinely, new and different from the original, makes it an interesting and worthy piece of work.  It subverts the value of the iconic image; causes us to look afresh at both versions; and, like most appropriation art, it questions the whole idea of authorship.  But, even as a book, I’m not sure that it stands up successfully on its own.  Maybe it is only of ‘value’ through its relationship with the original?  And, on this gallery wall, the selection of prints does not, for me, move things on any further, maybe is even a step backwards from the book concept.

‘Precious Commodities’ is another thing altogether.  There were four pieces on show, all appropriated via the internet and created from aerial views of oilfields and cattle feed lots in the USA – highly processed, printed to a very high standard, and presented as large-scale colour images.

The main piece comprised around 12 square prints, which seem to come from this body of work - Pumped.  These were ‘nailed’ to the wall, in a grid, to form one single piece, perhaps 3-4 metres by 2-3 metres.  As is clear from the images in the link, the ‘marks’  around these oil wells form patterns, broken occasionally by small rectangular spaces where buildings/wells appear in sharp black, almost as if they have been drawn in with a brush or pen.  The high quality/contrast nature of the colour prints seems to give them a surface texture – resembling stone, or textiles, or an oil painting.  And, standing back to look at the complete work, that is what it most resembles – an abstract oil painting onto which small pen/brush drawings have been added.  (I was reminded of watching Andrew Graham-Dixon at the Rijksmuseum He became hugely enthused – and rightly so – by computer scans that brought up, in fine relief, the surface of Rembrandt’s paintings.)

Of course, these images (all of which can be seen here) are, potentially, pointing to issues about the environment, land use, food production, and so on.  But one can read the exhibition titles, and the artworks, in another way, I think.  For me, they also seem to be about form; about appropriation; about taking worthless, insignificant ‘bits’ of digital information and turning them into a work of art on a gallery wall.  Yes, the oil, the cattle, the land etc are all ‘precious commodities’, but the title also seems to refer to the perceived value, added by Henner, in turning something meaningless into a work of art.  The use of the word ‘commodity’ refers to the questionable commoditisation of art by the art market.  Does Henner wish to sell these images – presumably (and rightly) so.  Then he is knowingly participating in a market that attaches monetary value to creativity and so the work, perhaps, raises and explores the question of whether the ‘market’ is an appropriate mechanism for determining the ‘preciousness’ of the creative ‘commodity’.  I liked these works a lot; they fascinated me and drew me in to explore their form in detail.  I feel that Henner, too, is fascinated by what he can do with the original, meaningless digital information he harvests from the Internet.

I would also draw comparisons with two other artists that I have discussed previously in this blog – Penelope Umbrico’s Flickr Sunsets and Edward Burtynsky’s Oil.  Umbrico’s appropriated work seems to touch on the same issue of taking the insignificant and meaningless, harvesting the digital crops, and turning them into something meaningful and of ‘perceived’ value.  Burtynsky is another who explores the questions of land use, environment, etc through high-aesthetic images on a gallery wall.  Unlike Burtynsky’s work, Henner’s seems to step right away from the notion of ‘documentary’.  It is not clear what is being presented in the images and, whilst they might lead the viewer to ask the questions, there is also a sense in which they fascinate by their form more than their content.  Are they conceptual pieces, exploring what they are as art rather than what they show of the world?  I think, perhaps, so; and it is probably a sign of that fact that I have, personally, moved on somewhat in my reading and interpretation of images that I read, appreciate, and enjoy them in just that way.

The other exhibition at the Open Eye was quite a contrast - 'Quiet Radicalism'.  Quite a small show, from the Open Eye’s archives, it comprised, perhaps, 15-20 black and white prints, in simple black frames, mainly from her 1930’ photographs of Vienna, London and South Wales, but also including 3 or 4 from 1940/50s.  The interest, here, is as much around her motives and her background as it is about the images themselves.  She came from the ‘committed left’, a communist sympathiser, born in Austria but living in the UK, and connected with the Philby/Blunt Soviet spy ring.  The question was raised, towards the end of our viewing, as to whether or not we ‘liked’ them, with a suggestion that some people ‘dislike’ them because of their association with her political stance and her spying.

For me, they fall into the category of 20s/30s/40s black and white documentary photography, which includes the FSA, Bill Brandt, and so on; and they are ‘typical’.  (There might be formal differences e.g. several images are taken from and elevated viewpoint, which can be compared with Soviet photographer Rodchenko.)  With the benefit of hindsight, one might question whether these images, and those of other comparable documentary photographers, actually made a difference to anything; and there is a sense in which they become historical archives of what the period looked like.  Except that they aren’t of course, because life went on in colour!  Coincidentally, I was flicking through the Sunday Times next day, and came across this colour image of Paris 1944.  How would we read this image differently if it was in black and white?

So – a good visit – I am pleased to have seen the new Mishka Henner work, and it is of immense value to meet and chat with fellow students and two OCA tutors.  Many thanks to Peter H and Keith R for their input.